A top quality fully-built very quiet gaming PC, using an Intel 12th gen CPU and powered by an ASUS Z690 motherboard. This formidable machine consists of only the quietest components from brands like ASUS and Noctua. 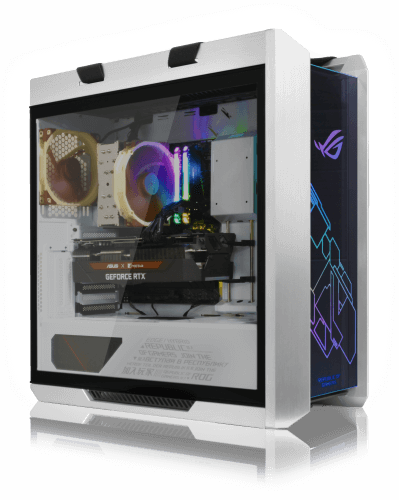 The philosophy behind the Serenity Ultimate Gamer i17 is to offer the quietest gaming experience possible using just standard off-the-self components. Of course you could go to the extreme of configuring a totally fanless system around Monster Labo’s The Beast, but that is not the most user friendly solution especially if you want to making slight alterations to the system.

The Ultimate Gamer i17 needs the very best components, which is why you’ll only find that the vast majority of the products used are from ASUS or Noctua. These manufactures are easily leaders in their respective fields. ASUS have produce the best motherboards and graphics cards for decades, while Noctua are without a doubt the world’s most popular air cooling brand. The only components not covered by ASUS or Noctua are the CPU, RAM and storage drives.

The case is supplied with four ASUS ROG 140mm fans, one at the rear and three at the front. The configurator below has an option to remove these fans and replace them with four Noctua NF-A14 ULN fans. The main reason to do this is to reduce the noise output the PC generates. The ASUS fans, from a noise point of view, are what we would class as “OK”. They are certainly not overly noisy, but we would not consider them to be quiet, especially when you are wanting to configure a very quiet gaming PC.

The case also features a fan control switch, which has two settings, high and low. The table below shows the differences between the ASUS and Noctua fans at both the ‘High’ and ‘Low’ settings. As you can see the noise is much lower on the Noctua fans, and having four of these built into the case provides more than enough airflow for the system to maintain acceptable temperatures. 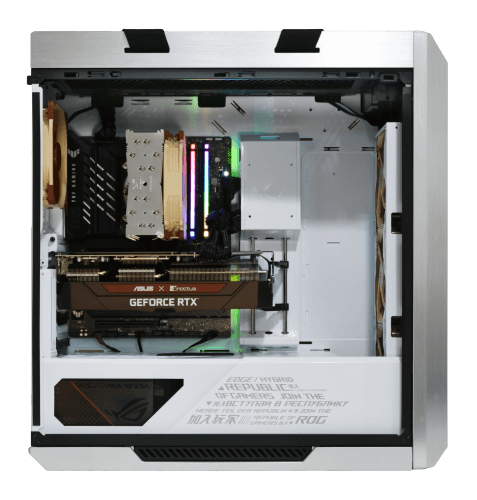 Side view of the Serenity Ultimate Gamer i12 with the side panel removed. Please note, Noctua Graphics card is currently unavailable.

CPU Cooler - The Intel 12th generation CPUs are their hottest yet so they need good air cooling and the available Noctua CPU cooler for this PC are more than capable of keep the heat generated by the CPU in check! The nosiest CPU cooler on the list is the NH-U12S REDUX, which has a maximum noise level of 25.1 dB(A). For the cooler to achieve this maximum noise level the CPU temperature would need to be consistently in the 90°C range. In normal gaming usage it is the graphics card that is push more than the CPU, so you should never get temperatures in that range while gaming.

Power Supply - The power supplies available are the ASUS ROG STRIX range. These high quality PSUs are 100% modular which helps reduce the amount of cable inside the PC. From a noise point of view at 100% load the noise is 25 dB(A), but the power supply will never be near 100% load. During our tests the 750W power supply maxed out at just under 500W, meaning 65% load, which resulted in a very low noise level of around 15 dB(A). Also, when the PSU is under 40% load the fan inside the power supply will stop and therefore make zero noise.

With all of the noise generating components taken care of, we guarantee that this PC will be unbeatable in regards to performance and noise levels for the components it can be configured with.

The 12th Gen Intel processors offer a significant improvement over past generations, thanks to the introduction to Performance-cores (P-cores) and/or Efficient-cores (E-cores). The processors P-cores are optimised for single and lightly-threaded performance, while its E-cores, are optimised for scaling highly-threaded workloads. That means gamers, creators, and professionals can harness both intelligence and power to enhance the experiences that matter the most. All processors on the list feature P-cores, but not all offer E-cores. To give you an idea of much of an improvement the 12th gen is over the 11th Gen processors, take a look at the table below that shows some PassMark CPU Benchmarks, the higher the number the better the performance the processors offers.

The figures above are as of September 2022. They do change over time.

Let eTeknix take you through the Serenity Ultimate Gamer in the video below.

Silent but with all the power

Awesome build, full of quality. Would I recommend? Yes, certainly under the current pandemic, whereby trying to buy a GPU is very hard. This has the GPU I really wanted, the build is for people who want a quiet gaming experience.

It is all housed in a case that oozes quality and is big enough to accommodate water cooling if you prefer. Replace all fans with Noctua for the best experience in my opinion.

If you want a silent system and cannot wait for the chip shortage to recover, this is a good choice to purchase. You will likely be very happy with this PC.

Service to shout about

A quality service from Quiet PC, the website is clear and easy to navigate, the product is good quality and well engineered. Delivery is prompt and when promised. Something to shout about in this day and age.
(Review via Trustpilot)