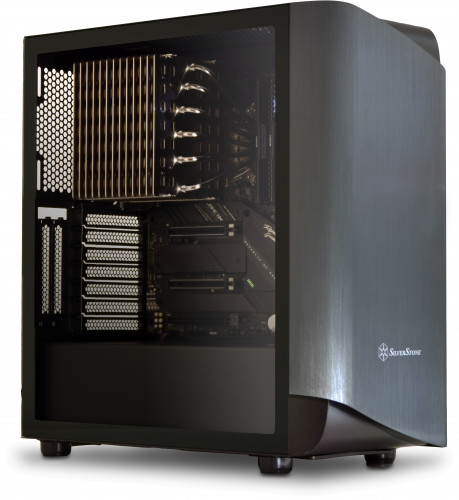 We are delighted to offer the Quiet PC A1090i Fanless which is a fully-built ready to go silent computer system that utilises Intel’s latest generation CPUs and a Z590 motherboard. The CPU is silently cooled by either the Nonfan’s IcePipe processor cooler or Noctua’s NH-P1, both of which offer no noise, no dust, no moving parts and no maintenance. The machine can be configured to your exact specification and offers, as you would expect, totally silent operation. The PC is housed in the sophisticated, but compact SilverStone SETA. The large ventilation area at the top of the chassis allows for all of the heat generated by the internal components to naturally dissipate up and out of the chassis.

The 500 series motherboard available with this system is compatible with both the 10th gen and 11th gen Intel processors, which is good as it gives flexibility and choice. The down-side to this is that the motherboard limits its features if a 10th gen processor is installed. We have therefore produced the table below to give you an idea of the what those differences are. This will hopefully allow you to gauge the best suitable processor for your needs. Do you go for the feature rich 11th gen, or opt for a 10th gen with limitations, but more attractive from a price point of view.

PCIe Version - As you can see from the table above the PCIe port, which is generally used for a graphics card, changes from PCIe 4.0 to 3.0 if a 10th Gen CPU is installed. In regards to performance of the graphics card and PCIe 3.0, you will not notice any major difference in frame rates running at PCIe 3.0 speeds.

M.2 PCIe 4.0 port - A M.2 drive offers extremely fast transfer rates and this is bolstered by PCIe 4.0, which gives speeds up to 64Gb/s (8000MB/s), compared PCIe 3.0 which is 32Gb/s (4000MB/s). This means using an 11th Gen processor along with a Samsung 980 Pro will allow you to achieve the maximum transfer speeds the drive can achieve. Please also note that the PCIe 4.0 M.2 port will be disabled if a 10th Gen CPU is installed. If you do opt for a 10th Gen CPU you will still be able to populate the other M.2 ports on the motherboard but the transfer speed is 32Gp/s, so the Samsung 970 EVO Plus or a slower drive is recommended.

As mentioned above, this system can be configured with either Nofan’s 80-EH IcePipe or Noctua’s NH-P1 CPU cooler. It is important to note that the Nofan cooler is not compatible with any K-suffix (over 65W TDP) processors, they just output too much heat. Therefore if you would like to configure the system with a K-suffix processor then the Noctua NH-P1 Passive CPU cooler must be selected. The table below shows which CPU cooler is recommended for different TDPs.

This particular computer utilises the Z590 chipset, so expect the improved connectivity, like USB 3.2 Gen 2x2 for USB speeds up to 20Gbps. The Z590 chipset also features RAID, M.2 connectors, premium audio, HDMI and DisplayPort outputs and support for up to 128GB RAM. Below are images of each motherboard available in this system with a table that shows some of the specification each motherboard offers. 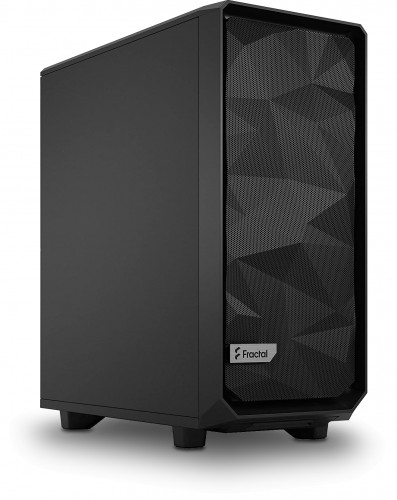 This system is now available in the Fractal Design Meshify